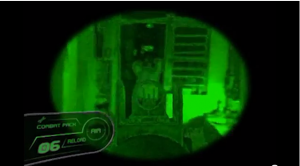 An 15 year old young man has been arrested for using a smartphone app called the real strike app to “shoot” classmates at H. L. Bourgeois High School.  The app places a virtual gun and user interface over a real background seen through the phone’s camera: in the style of a first person shooter game.    A student tested out this application, and then regretably posted a video of it all on YouTube;  as an outlet for “getting back”  over bullying  the student was a victim of.  (authorities have since, had the video deleted).  Another student’s parent discovered the video on Youtube, and was upset: the parent reported the matter to police.

Authorities decided the student was a threat

Major Wolfe of the local police said, “You can’t ignore it. We don’t know at what time that game becomes reality. He said it was a result of him being frustrated and tired of being bullied. He said that he had no intentions of hurting anybody. We have to take all threats seriously and we have no way of knowing that without investigating and getting to the bottom of it. With all the school shooting we’ve had in the United States, it’s just not a very good game to be playing at this time.”

The Student faces the possibility of a long prison sentence

For more on this, see the KSLA Article:   “Terrebone Parish teen arrested for using app to shoot classmates”

and the WGNO Article:  “Student arrested for using phone app to ‘shoot’ classmates”

It seems sad, that authorities and school officials can no longer distinguish a child’s fantasy from reality.

Summary
Article Name
Terrebone Parish teen arrested for using app to shoot classmates
Description
A 15-year-old boy in Terrebone Parish is facing criminal charges after authorities say he used a mobile app to go on a virtual mass shooting at his high school. Authorities and school officials can no longer seem to distinguish real threats or a child's fantasy from reality.